Classic Carriers, a family-owned and operated transportation provider, is celebrating two of its own employees. Long-time Safety Director Tim Subler is retiring, and Driver Manager Robert (Rob) Flores is being promoted to Tim’s position.

Both have been invaluable to Classic’s team and are grateful for the opportunities and family-like atmosphere that Classic provides. Discover more about Tim and Rob in this blog and find out what they look forward to in the future. 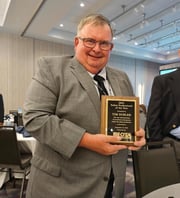 Tim began his career at Classic Carriers as a dispatcher in January 2004. He was in charge of the LTL operation out of Chicago until President Jim Subler offered him a safety position early in 2005. In his new position as safety director, Tim oversaw the safety and cargo claim departments.

“As the safety director, my number one priority was to keep us in compliance with the Department of Transportation, including the drug and alcohol program,” says Tim. “It was my responsibility to ensure the safety of our fleet — and get these guys back home at the end of the week safely.”

Additional aspects of this position include providing ongoing training and support to all the drivers.

Tim says, “A lot of times I stepped into a position similar to a chaplain where drivers experience issues while they’re out on the road by themselves — and really, they need somebody to talk to.”

Reflecting Back on Nearly 20 Years of Service

In looking back at nearly two decades of service to Classic Carriers, Tim shares what he appreciates most about his time here.

“We’ve got great people that work here,” says Tim. “Anytime any of us has experienced a hardship of any kind, the Classic team has been there to help in whatever way they could, whether that’s starting a fundraiser or filling in where needed. I’ve certainly enjoyed and appreciated that.”

Tim also values the support he has received from the management. Classic encourages an open-door policy where employees are invited to share feedback and ideas to their management team.

“I’ve always had the backing of management, as they have always prioritized being a safe company,” says Tim. “They were supportive of my ideas and suggestions, even when times were hard.”

Lastly, Tim is grateful for the hard work the team at Classic puts forth every day.

“We absolutely have the best workforce,” says Tim. “They’re dedicated to their jobs, and they’re willing to help you when you’re down. It’s just a good environment.”

Planning for Retirement and Transition

Tim’s retirement as safety director won’t end his journey here at Classic. Instead, he will be working part-time assisting Rob in his new role and helping support the company’s recruiting efforts. But Tim is still ready to have additional free time each week.

Tim is also ready to get a full night’s rest. As safety director, it’s normal to get calls in the middle of the night from drivers about accidents or other issues, and he’s glad that he won’t have to worry about that anymore.

Hired in early 2021 as a driver manager, Rob has nearly 15 years of experience in the transportation industry. He is a former driver and account supervisor, so he’s worked in a variety of roles and is sometimes referred to as a jack of all trades. He isn’t afraid to get his hands dirty and prides himself on staying safe and not leaving until the job is done.

As driver manager, Rob has been responsible for anywhere between 20-40 drivers at a time. He planned the loads and secured driver availability to ensure deliveries were made on time. He’s enjoyed building relationships with the drivers so they know they can count on him for information and support as needed.

“We always want to make sure that the drivers know they’re not just a number to us here at Classic — we know them by name,” says Rob. “In fact, I have trouble remembering their truck numbers most of the time, but I do remember their names.”

Related: Inside the Cab with Driver Chance Durden >>

Leading by Example and Learning From the Best

Like Tim, Rob feels Classic works as a team and creates a family-like atmosphere where management is approachable and welcoming.

“It’s just one big family,” says Rob. “I think that makes everyone feel comfortable in their positions and that they have ownership in the company.”

For these reasons and more, Rob is thankful for the opportunity to move into the safety director position.

“I’ve always considered myself to be someone who’s very, very safe,” says Rob. “It’s always been a top priority, since my days as a driver myself. I’m excited to be able to focus and put all of my efforts into the safety program here at Classic.”

Even though Rob has some big shoes to fill, he is ready to work hard in his new role and continue to build upon a solid safety program. He hopes to lead by example and reassure drivers that he is available when they need him.

“Tim has set up a really, really good program where there’s an open door policy and drivers aren’t afraid to go to the safety office,” says Rob. “I’m looking forward to continuing that program and being there for drivers when they need someone to listen and help them get through situations. I want them to know that we’ll figure it out together.”

Ready to Hit the Road with Classic — and Join a Winning Team?

Classic Carriers is proud to recognize both Tim and Rob because we care about each of our employees — they are part of our family. View our careers page if you’d like to learn more about our current job openings. You’ll find that we offer competitive pay packages and benefits along with freedom and opportunities for growth.